From gracing local neighborhoods throughout the Bay Area to emerging on the streets of Japan, the striking cars and tight community of lowrider culture have evolved from traditional Latino roots to bring people together from around the world.

With the flick of a switch, a 1976 Chevy Nova shudders to life, hopping up onto its back wheels and landing with a thump, demanding the attention of all those nearby. It roars back and forth, dancing to the cadence of a low-humming engine as shoppers, frozen in their tracks, stare in awe at the lunch-time interruption. As the wheels lower and the car recedes to its resting state, Barbara Johnson—secretary of Lowrider Club Lay-M-Low’s East Palo Alto branch—steps out, her bright-blue braids complementing the pristine exterior of her car.

Lowriding culture can be traced back as far as the 1940’s, when many Latino men who joined the military during WWII returned in need of jobs, now home with newfound mechanical skills. With an influx of old cars needing repairs, many turned to garages which largely congregated in East and South Los Angeles to fix and customize vehicles. The first lowriders would ride leisurely around town, displaying their cars and even putting sandbags and cinder blocks in their trunks to drop their cars lower. This laid-back attitude remains at the heart of lowriding with the unofficial motto: “low and slow.” Resourceful, hard-working and creative, these early lowriders defined a cultural phenomenon that would extend to all corners of the world. 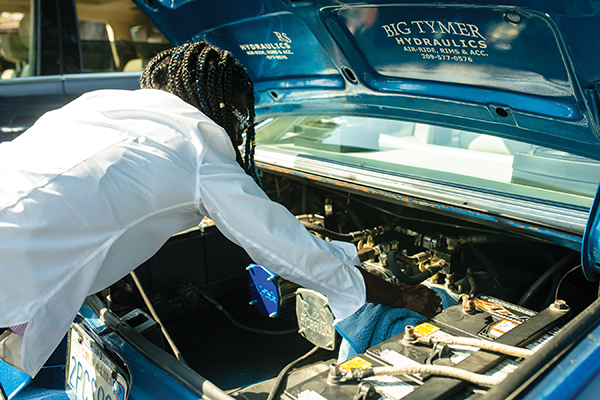 Lowrider, Barbara Johnson, working under the hood of her custom 1976 Chevy Nova

Johnson’s lowriding journey began at sixteen, when she acquired her first car, a 1968 Chevy, which she named Poor Girl’s Dream. Growing up in poverty, she aimed to inspire the community around her and project her ambitions for the future. “That was something that a poor girl would dream of—[something that] someone from poverty wants,” Johnson said.

Most lowriders share an early fascination with lowriding, whether it be the distinct fashion, a family tradition or the classic “low and slow” method of driving. Whatever prompts this attraction, one thing remains true: the powerful connection within their communities. “The thread that brings us together is not just the lowriding,” Roberto Hernandez, founder and head of the San Francisco Lowrider Council, said. It’s around food, it’s around bonding, it’s around music. If you break down, we all pull over. We won’t leave until your car is fixed or you’re getting towed.” The bond between these men and women runs much deeper than just cars. These groups are a second family; one which strengthens the community as a whole.

For many, lowriding has also become essential to upholding their Mexican-American heritage. “I really could identify with lowriding because it’s a Latino Chicano thing that we invented,” Hernandez said.

In addition to connecting with and representing one’s background, lowriding offers an outlet to display individuality. “You’re never going to find two identical lowriders. There is no such thing as twins,” Hernandez said. “Each lowrider that I have built is my imagination, combined with my heart, my soul, my spirit, my mind and my body. What I have put into, I have created this art piece and when it moves down the street, it’s just like a magnet.” In order to customize their cars with the striking colors, designs and technology that define their style, lowriders utilize a network of local specialists to fulfill their vision, as well as expand their own skill set. Hydraulics, painting, electrical work and sound modifications are just a few of the endless possibilities in the assembling of these vehicles.

As much as the cars are a display of personality, they also inspire competition between members of the lowriding community. Shows are taken quite seriously, not only because of the prizes ranging from trophies to large sums of money, but because lowriders take great pride in their creations. For the few number of women in the clubs, the fierce competition can be deterring. Being the only woman remaining in East Palo Alto’s Lay-M-Low, Johnson said that she had to overcome jealousy and dismissal to become fully accepted as a competitor. “I’ve pulled up on the side of guys and hit my switch or made my car go up on three wheels and their cars didn’t do anything… they don’t like that,” Johnson said. 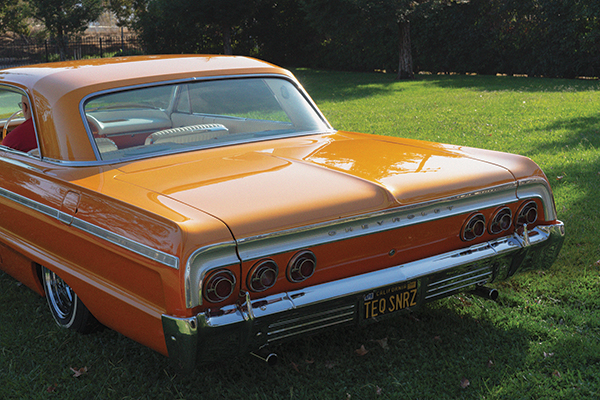 In East Palo Alto, establishing a car club was a challenge, as balancing the community and local lowriders proved  to be difficult. “We would always ride around East Palo Alto and look for things to do—positive things to do—and the police would bother us a lot because a lot of the cars were illegal,” Johnson said. Lay-M-Low found a solution by communicating with the local police to avoid legal barriers and negotiate restrictions by attending city meetings which cultivates a positive relationship with the local law enforcement.

Johnson’s troubles are not, by any means, unheard of. Lowriding has been haunted by challenges of discrimination since its beginnings in Los Angeles. “[Lowriding] was looked upon by society as something negative,” Hernandez said. “It was looked upon as gang related. We were stereotyped as gang members, drug dealers and bad boys.” Throughout the 80’s and 90’s, lowriding became increasingly associated with gang violence, embraced by the likes of Eazy-E, Snoop Dogg and many other West Coast rappers. This reputation fueled the misguided presumptions about minorities, specifically Latinos, whose flourishing culture was branded as “gangster.”

On the contrary, lowrider clubs often strive to create a positive impact in their communities. In the forty years since its establishment, Lay-M-Low has become an avid contributor to many Bay Area communities, organizing welfare drives, barbeques and car shows with its other chapters in Fresno, Sacramento, San Jose, Stockton and Modesto. “On Thanksgiving, we get together and make baskets, go to the food banks and feed the less fortunate. On Christmas we get presents and give baskets,” Johnson said.

As New Year’s festivities commence in Stockton, Calif., the streets are filled with floats, promptly followed by the thudding and roaring of lowriders. Excited cheers erupt from spectators, lining the streets to enjoy the show. “[People] expect it every year,” Johnson said. “They’re already sitting out in front of their houses in their lawn chairs. All the kids got their popcorn. It’s something they look forward to every year.” In the Bay Area, lowriding has become an essential part of the culture. “When the San Francisco Giants had the championship parade, we were in that parade carrying the players. When the Warriors won the championship, we were in the parade. When they had the 50th anniversary of the Golden Gate Bridge, we were apart of that … I could go on and on and on,” Hernandez said. 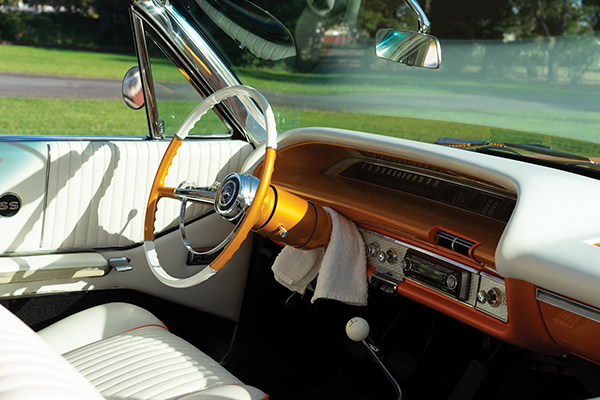 In an ever-modernizing world, the traditional lowrider culture continues to thrive, contributing to its allure. Curiosity arising from all walks of life, and the persistence of tradition within the culture has kept the lowriding community alive and growing. “We have now three generations of lowriders within the family. It’s just amazing how we’ve seen somebody start lowriding, then their son is lowriding and now their grandchildren are low riding,” Hernandez said.

Since its beginning, lowrider culture has blown up worldwide. Sparking a wave of interest everywhere from local Google employees and teenagers to inspiring a thriving Japanese fashion and lowrider culture of its own—inspired by the classic cars and style of their United States predecessors—lowriding is an art which has withheld the test of time. Brian Sweeney, the proud owner of a 1964 Chevy Impala living in Antioch, Calif., stands with many in the lowriding community who believe that the art of lowriding is just getting started. “It [lowriding] will never die,” Sweeney said. “It’s too big of a thing and it makes too much of a statement of how you take the cars and care for them. It’s a tradition that is second to none.”