What Ghost Ship Means to Other Artist Collectives 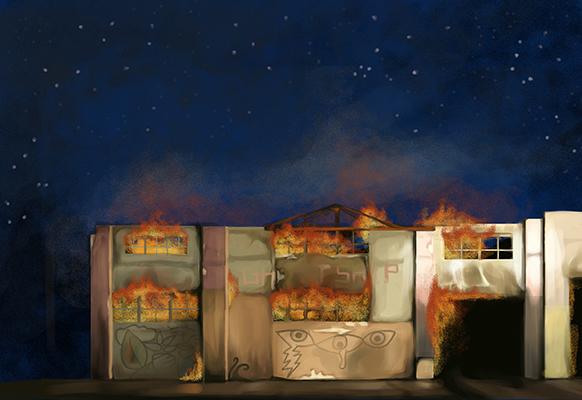 The innards of the Ghost Ship Warehouse have been compared to a maze; the stairs were made of plywood slabs and held together by string. On this particular night, the warehouse was packed beyond the capacity, making disaster inevitable. On December 2, 2016, EDM artists Obsidian Blade and Golden Donna played what would end up being the Ghost Ship’s final show.

All it took was one spark that jumped from the refrigerator to set the warehouse ablaze. The fire would eventually cause the roof to cave in, fully decimating the structure of the warehouse. When the fire started, the majority of the attendees immediately rushed toward the door, emulating a stampede of people trying to cram their way through the door. Thirty-six people perished, making it the most fatal fire in US history.

Warehouse collectives, similar to the Ghost Ship, are a cheap and efficient way for artists to make a living. As a consequence of the elevated costs of living in the Bay Area, artists use warehouses as a place to live and create their work. The $300 dollar rent appeals greatly to artists who want nothing more than to work on their art. Artist collectives also allow for creators to live with each other in a space dedicated to art. Artists can collaborate with one another, spend days on end focusing on a project, and not have to worry about whether or not they’ll have a bed to sleep in. However, after the recent Ghost Ship fire, concerns have been raised over the safety of art warehouses. Many artists live in these warehouses all at once in hopes that, one day, their art will shine under the spotlight. After the tragic events in Oakland, the general concern is that having many artists living in these poorly maintained buildings is a safety hazard.

The landlord of Ghost Ship, Derick Almena, was renting out the warehouse to struggling artists for as little as $10 a day. Almena was an extremely generous landlord, but he was also a very negligent one. He turned a blind eye to repairing the building, so Ghost Ship was an undeniably unsafe party space. Shorty after the devastating fire, the investigative team realized the building had not been properly inspected in over three decades. The building had a complex maze-like interior, and no fire alarms could be found. Ghost Ship was a tinder box just waiting to be lit.

These collectives are extremely instrumental in the development of art and artists. The American dream isn’t cheap, and creativity takes time, a luxury that most artists do not have. Tristan Lorach is a software engineer from the Bay Area. He is a connoisseur of the San Francisco nightlife and art scene. Attending Burning Man every year is one of his favorite traditions. “I think this crisis of the artist collectives symbolizes the problem of ‘Gentrification’ of San Francisco. Who wants to (or can) live in a city where everyone is only in finance; at Google, Facebook or Tesla? The ecosystem needs of everyone and of all social and cultural levels.” Lorach said.

The fire caused many to voice their opinions on artist collectives. Of these voices were those of naysayers. Instead of paying their respects to those who perished, critics accused the victims of being the reason the fire started in the first place. One critic went as far as to say if the attendees were not high on MDMA, a drug associated with rave culture, they would have been able to make it out alive. This accusation, however, serves as a critique to rave culture in general. What happened at the Ghost Ship was a tragedy, and unfortunately, it was an avoidable one. If an office building catches on fire and lives are lost, do you blame the people who simply went to work? The victims of the fire were not to blame. Rave culture is not to blame. And certainly, artist collectives are not to blame for the mismanagement of the Ghost Ship. It does not represent all artist warehouses, though some may seem to think so. Prior to the fire, The Oakland Planning and Business department was conducting an investigation due to allegedly “blight” and “illegal” interior construction. Warehouse collectives often find themselves in these situations. Agencies single out many collectives as structurally unsafe due to mass amounts of clutter and hazards, usually causing the warehouse to shut down. The Ghost Ship chose to not shut down or abide by the code of the city, which resulted in its devastation. Kristie Evans, a former firefighter, believes that there is a solution to this problem: “We should come together as communities and make these buildings as safe as possible — not by calling all of the art “clutter” and ripping it out and then calling the artists criminals and running them all out of town.”