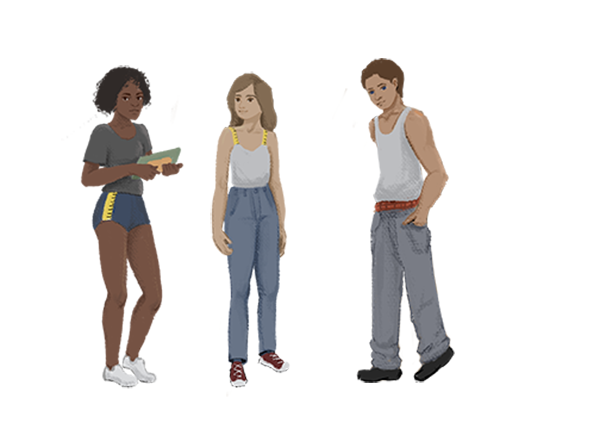 The first day of school can be nerve-wracking for anyone. But being singled out by an authoritative figure for a dress code violation just adds to the stress of a new school year.

Paly juniors Sophie Kadifa and Hana Erickson, for example, recall being dress coded for wearing shorts deemed too short within the first week of middle school.

“I was wearing jean shorts,” Kadifa said. “It was on the second day of sixth grade and [the vice principal] had a line of girls behind her. She walked down the hallway and started pointing at girls [saying] ‘Get in line, get in line.’ There were 20 of us just lined up and we were all sixth graders. I don’t even think we [had] learned what the dress code was.”

For a school to establish a dress code, the aim is to shift students’ attention from their classmates’ exposed skin to their schoolwork. However, the effort to enforce dress codes has unintentionally placed clothing under the spotlight and detracts from the learning environment, particularly targeting girls. “It was our first day at Jordan on our own, and we had just finished Jaguar Journey,” Erickson said. “She made us write down all of our names on a piece of paper. I think it was just to scare us.”

Often, shorts, spaghetti-strap tank tops and crop tops fall under the inappropriate section of a school’s dress code, limiting acceptable clothing to only modest and conservative styles. Schools without restrictive dress codes often issue mandatory school-wide uniforms, revoking students’ freedom to wear their regular clothes. Generally, schools have established dress codes under the presumption that revealing and inappropriate clothing will distract from learning. The infamous “finger-tip rule” ensures that students’ shorts are longer than fingertip length when held to one’s side. This regulation is often coupled with a two-finger-width strap rule and prohibiting shirts that reveal the midriff. Students are punished for wearing these improper clothes and forced to change into loaner clothes — something more appropriate — until the school day ends.

In middle school, however, these aggressive policies on clothing can seem shocking to children who are just beginning to explore their own clothing choices and self expression. This raises a new issue where students are forced to conform when they don’t understand that their clothing is a problem to start with. “It was weird because I was twelve — so I was a baby — and I never thought about people staring at my body before,” Kadifa said. “The incident made me self conscious because I realized that I was supposed to cover up so that boys wouldn’t stare at me.”

Unlike many public schools, Paly does not enforce a serious dress code on students, which is reflected in the school handbook. Under the “Appearance and Dress” section of the “Palo Alto High School 2019-2020 Student Handbook,” students “must be within the limits of decency, cleanliness, and appropriateness for school, and shall not interfere with teaching and learning.” The only additional enforced dress code exclusions are displaying illegal substances, alcohol, hinting at gang-related actions or inappropriate outfits, which is specified and defined with the line “bathing suits are not proper attire for school.” With no further clarification of appropriate clothing, students are left to interpret a blurry line between what is acceptable and what is not.

As written in the “Greene Middle School 2019-2020 Handbook,” the school’s main expectation is “that students dress in a style that is conducive to learning.” The handbook also identifies that students clothing should be age-appropriate.

Notable changes that made Greene’s dress code policy what it is today were prompted by dress code accusations against former student Eve Donnelly and her response to the situation. “The first teacher I denied to change [clothing] to was furious,” Donnelly said. “She called my parents, made hurtful personal remarks that had nothing to do with the situation and made me feel scared and judged.”

After this incident, Donnelly noticed that the regulations consistently limited and called out female students more often than their male counterparts, which became more than apparent during an assembly about school expectations. “They literally said that the boys could ‘tune out’ the dress code presentation because it didn’t apply to them,” Donnelly said. “They verbatim used the phrase ‘boys will be boys.’”

Believing the dress code was outdated and specifically targeted female students, Donnelly was compelled to change the rules. “Being called out on my ‘inappropriate’ outfits made me feel gross, objectified and angry,” Donnelly said. “That’s what made me want to take action because I couldn’t just allow this to continue.” Despite facing backlash from adults in the community, Donnelly did not stop her campaign for a new clothing policy. She continued headstrong and proposed to a few teachers that the handbook needed some revisions. “[One of Donnelly’s teachers] came to the conclusion that just because she may feel uncomfortable that someone is dressed a certain way, that it is her own judgement and she can’t decide the way a person dresses,” Donnelly said.

Though her dress code protest was successful, it took time to develop and execute. She talked with teachers, other students and the assistant principal in attempts to create change without much success. After persistently advocating for an adapted policy, she was able to change the dress code for future students. “The dress code before was the two-finger-width straps rule, no midriff, [and] shorts [or] skirts below fingertips,” Donnelly said. Now, the Greene Handbook explains the dress code is focused on allowing students “to feel comfortable and express their individuality,” while also encouraging “students to keep their focus on learning [while] maintaining age-appropriate expectations.”

While dress codes may limit students’ self expression, they replicate a professional workplace that students will face as they approach adulthood. By instituting these guidelines in junior high, students are able to be more conscious of their clothing when they begin higher education or enter the workplace. There are societal norms that have been ingrained in our community, but as a preteen it can be hard to understand what is socially acceptable to wear in public and what is not. This causes the need to regulate specific wardrobe choices among students who are not quite mature enough to make these decisions themselves.

The effect of establishing a dress code and requiring appropriate clothing is not a question of how it impacts students’ learning, but more of what is generally tolerated to wear in a public setting. As Kadifa said, “If someone is so distracted by what someone else is wearing, then they need to be taught a lesson about respecting people.” 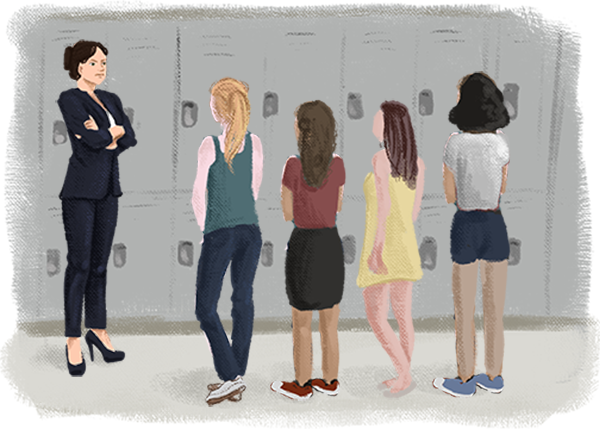