Genevieve Liebscher, a former Paly student, represents one of the few who decided to take an untraditional career path. Delve deeper into two Paly alumni’s lives as they pursue their dream lifestyle. 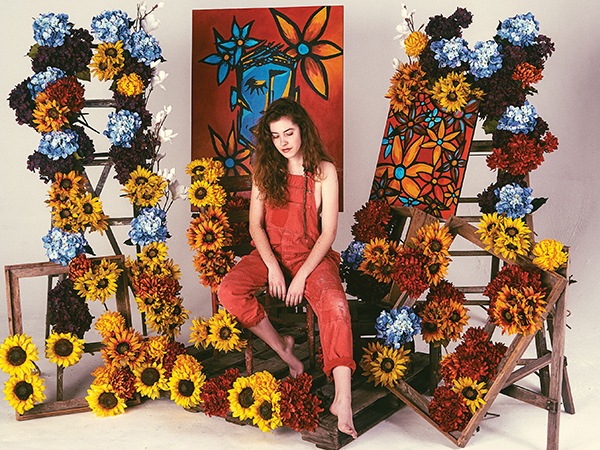 It’s always been easy to follow the same path as your peers. You take the same classes, take part in the same extracurriculars and go to the same colleges. It’s a path we have been following throughout our school careers and one that many are happy and fortunate to take. However, some realize their goals and aspirations don’t lie in the lecture rooms of a college campus, and go on pursue their dreams in alternative ways. Those who have different aspirations for their future follow many different paths, from designing their own clothing to share with thousands of blog followers to finding their space in the music world. All around us, people are forging their own creative life journey.

Genevieve Leibscher is a full-time fashion blogger based in Venice Beach, Los Angeles. Liebscher was attracted to the aspect of living in Los Angeles because she wanted to pursue an acting and modeling career. However, she quickly fell in love with the city because of the excitement and all the activities it had to offer and decided to stay, acquiring a degree in communications from Marymount California University.

After graduating from Paly in 2005, Liebscher wasn’t completely sure about her future. She wound up going to college and after graduating attempted many desk jobs. The lack of freedom and the constant repetition proved detrimental to her happiness. She decided that she wanted to then pursue something that interested her and provided  her the flexibility to keep showcasing her skills. “I was bartending and modeling, then I was wardrobe styling and I did a lot of nighttime jobs because I was able to just be myself,” she says.

Eventually, her hobby in wardrobe styling led her to start a blog dedicated to discussing runway styles and street fashion. This soon morphed into a personal blog about her style , and she began to gain attention on social media, launching her into a unique career. “I started to gain some traction on social media and three years later, it’s become my full time thing,” she said.

She describes her style as unique editorial fashion. For example, she loves to incorporate vintage pieces into her everyday looks, as well as mixing high and low fashion clothing such as Louis Vuitton and Forever 21 to make herself approachable to a wide range of followers.

Liebscher finds great joy in her job, even though there are no company benefits, such as paid health insurance. “I love being my own boss,” she said. “I love the challenges that it takes for me to make money and how so much of my job is going around the city every day and meeting so many people,” Liebscher says. This independent and adaptable lifestyle allows her to work anywhere, as long as she has her laptop, really stands out to her as a rare and valuable opportunity.

Liebscher offers advice and wisdom for those at Paly thinking about pursuing a nontraditional career path. “I don’t think you should ever be hard on yourself just because you’re 19, 17, 23 or 33 and you don’t have your life ‘together’ because you don’t make a certain amount like your friends do,” Liebscher said. “It’s totally okay to try a lot of things and it’s just going to be part of the journey to figuring out what you want to do eventually.”

Even now at 27 years old, Liebscher doesn’t have a clear cut idea of where her blog will lead her in the future, but she aspires to begin her own line of clothing within the next year.

Vivian Laurence, a Paly alumni, is living and pursuing her various passions in San Francisco. After graduating from Paly in 2014, she moved to Los Angeles to study Visual Communications at the Fashion Institute of Design and Merchandising, but soon realized it was not for her. “The main takeaway is that I was learning more from the work I was immersed in outside of the classroom,” Laurence said. “Experiential learning, as they say.”

She quickly realized that the life that everyone around her was living is not the one that she wanted. “My goals for my life are more like visions, so a ‘traditional’ workplace just isn’t my cup of tea,” Laurence said.

Ever since graduating, Laurence has been looking to expand her music career. “For the past three years, I have been focused on recording and releasing my music in LA and Atlanta,” Laurence said. As an aspiring musician, Laurence has been growing and building her following on multiple music platforms. Her most popular song has 179,942 plays on Spotify and she continues to develop her sound, hoping to flourish into the artist she knows she can be.

One of her favorite aspects of her job is the way she can travel and experience the world while working. “One of the best parts about having my heart intertwined with my work is that I get to follow them both wherever they take me and I can work from anywhere,” Laurence said.

At the moment, she is living in San Francisco studying sound therapy, but plans to move and explore other places soon. Laurence is constantly ready for a new adventure, “I gravitate towards spontaneity, innovation and exploring our potentials as a collective humanity,” Laurence said.

Laurence wants other teens that are trying to find their place in the world to use her experiences as an example. “I believe the most valuable thing we can give to ourselves in times of uncertainty is space to slow down so that we can feel into what we really care about before moving forwards,” Laurence said.

She recommends taking a gap year in order to find what inspires and motivates you in life. Living in a world where we rush to follow the usual path, Laurence has a different view. “This life thing is a marathon, not a sprint.”