How music from our past is making a comeback to compete with new releases. 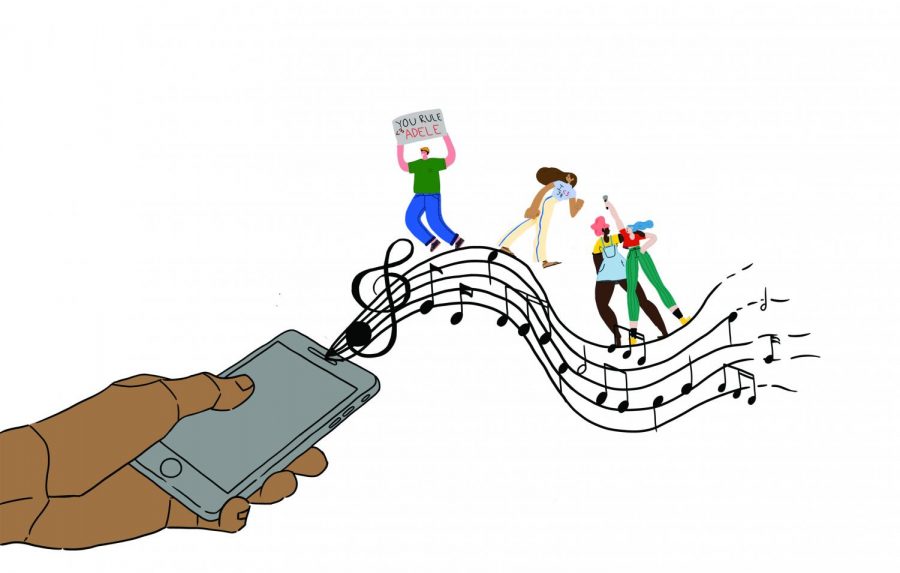 Pictures from your childhood may cause you to cringe, and reminders of clothing you used to wear and trends you used to partake in also cause similar embarrassment. One token of our past, however, that brings a smile to the face rather than a grimace, is music.

Many songs from our childhood have begun regaining popularity thanks to the nostalgia that they evoke. These songs are being brought back from under the radar through platforms such as TikTok. Junior Arohi Bhattacharya appreciates this rise of older songs that carry with them a plethora of emotions.

“I really love that older songs are gaining popularity through social media platforms and things like that,” Bhattacharya said. “To me, it almost stops time and brings back the feeling of old memories and cheerfulness, especially in the time that we’re in now.”

Bhattacharya, like many others, associates songs with memories. As songs of the past are now heard in many different places, they dig up these forgotten memories and act as a source of happiness in these difficult times.

“I was reintroduced to one specific song called ‘What the Hell’ by Avril Lavigne, and it just made me pause and wash away all my cares in the world,” Bhattacharya said. “I think old songs are gaining popularity because many of us are connected on social media and are becoming comfortable enough to share these songs and artists through these platforms.”

The fact that old music is being brought back to the current day has not gone unnoticed, even for those who are not avid music lovers, because the power of music is enough to bring back different emotions.

Sophomore Karol Bermudez describes music as a tool to connect time. “It’s interesting how powerful music is and how it allows us to ‘time travel’ through decades,” Bermudez said.  “A song I’ve heard that came back because of TikTok is ‘Chasing Pavements’ by Adele. Although the song was released in 2008, I grew up hearing Adele a lot in my household, so it was always in my head. It felt great knowing that one of the songs that I really enjoy listening to is able to reach a wider audience and that more people will be able to appreciate it the same way.”

While everyone’s music taste is different, songs of the past have a way of uniting these different preferences. However, some songs cannot cross certain barriers, such as the limitations of genres.

Bermudez believes that artists like Cuco faded into obscurity due to the bedroom pop genre dying out after 2018. The genre was very prevalent from 2016 to 2018 and Cuco was one of the standout artists.

“Nowadays, people on TikTok enjoy more R&B, rap, pop, international, and alternative music,” she said. There seems to be a set genre of music that gains popularity on social media platforms. Artists may try to overcome the limits that come with the genre of music they create, and when they succeed, they have created a huge hit.

Sophomore Katie Firtch believes that older songs are being brought back to life and due to increasing accessibility to different artists. “Now that the internet is a much more mainstream factor of everyday life, unsung artists are being brought to the forefront,” she said. “I think the exposure has been a constructive phenomenon for everyone, artists and listeners alike.”

As children, we did not have the direct access to all songs that we do now. We relied on CDs and tapes to listen to, which did not provide a lot of variety. Even with the growing popularity of iPods and other similar devices, songs had to be purchased individually and were expensive. Now however, millions of songs are accessible on a single platform, allowing old music to grow popular again.

As more older songs are added to music and social media platforms, many fans are finding ways to spread the music of their favorite artists. “Older or unheard of songs are gaining popularity because fans of the bands are finding niches where they can openly share their love,” Firtch said. People are generally less open to finding new songs that are outside of their genres, or musical comfort zones. However, TikTok provides exposure to songs that are outside of these comfort zones, allowing older and less popular songs to gain popularity, even if they were unpopular in the past.

Even with the increased accessibility of music, some artists remain unknown. One group of such artists are one-hit wonders, who fail to produce popular music even after gaining a platform and releasing more music.

“Some [one-hit wonders] have genuine talent, and were simply unable to maintain their careers, while others were lucky, and the stars just happened to align in their favor.”

As the name suggests, one-hit wonders tend to fade into obscurity after reaching their peak in fame. The fact that the music of these artists is known may be a testament to the quality of their music, as they are given the opportunity to expand their fanbase but fail to do so.

“Personally, I don’t tend to listen to [one-hit wonders’] other music because their hit record will typically set the bar high for their future works,” Bermudez said. “When they aren’t able to reach that bar, many people, including me, tend to be disappointed.” However, through TikTok, many of these one-hit wonders’ songs are being brought back to life.

While fans take an active role in bringing attention to artists, it is partly through the algorithms of TikTok and other platforms that allow unknown, or even forgotten artists, to be brought to light. Firtch believes that these breaks come by chance. “You don’t know what’ll be popular next, and that’s part of the thrill of exploring,” she said.

Not only do many of these songs and artists bring up our younger memories, but they play a role in who we are and how we have grown up. Connecting with your childhood through music on platforms such as TikTok has brought back the old happy memories that those songs used to bring us.