Music on the Mind

Getting technical about how listening to music affects our brains.

Picture this situation. It’s getting to be late on a school night, and the pile of homework you have to complete just won’t finish itself. As the night goes on, boredom turns into despair as you try and figure out exactly how you’re going to get the work done before it’s too late.

It would be foolish to say that this is an uncommon situation for students at Paly, yet for junior Mathew Signorello-Katz, he has devised a solution that may seem peculiar, yet proven effective.

“I was hit by a terrible case of writer’s block,” Signorello-Katz said. Like many students, Signorello-Katz had procrastinated and left much of his AP Seminar paper until the night before it was due. Luckily for Signorello-Katz, he had the unbelievable power of some good tunes on his side.

“I turned on the 70’s Greatest Hits channel on Spotify, and my productivity skyrocketed,” Signorello-Katz said.

Signorello-Katz is certainly not the only person to experience motivation and productivity boosts through music. There are many feelings that we get through music that are not only common, but can be explained by science.

Dr. Malcom Slaney, a Stanford professor in the Department of Music with a focus on audio perception,can affirm what Paly students notice about music’s effects on their emotions.

“The whole point of music is to manipulate, in a positive sense, emotions,” Slaney said.

Although music stimulates many parts of the brain, the emotional effect of music can be attributed to the limbic system.

The limbic system is the part of the brain responsible for emotion, long-term memory, hearing and more. When we listen to music, the limbic system reacts with feelings of joy, sadness or excitement.

In addition to elevating our emotional state, music also possesses the ability to dampen or even entirely block out our negative feelings. When we listen to music, the amygdala, a part of the limbic system linked to fear, anxiety and aggression, is temporarily inhibited.

So why doesn’t listening to words evoke the same pleasure? The answer lies in the fact that our brains perceive music differently than we do language.

“Words are great for the semantic message, like describing how to put together a car,” Slaney said. “But music is something that affects the emotional system.”

This fundamental difference between music and language is part of what makes music so valuable to us humans.

“It communicates things that are hard to do with words,” Slaney said. “I mean, you can do poetry –you can describe things, but music affects the limbic system very directly and people can understand that without knowing language.”

Aside from evoking a range of emotions, music has also been shown to reduce stress and boost positivity. Paly students can attest to this fact. In the same survey conducted among Paly students, it was found that music allows 82.9% of students to think positively and 100% of students to feel less stress. 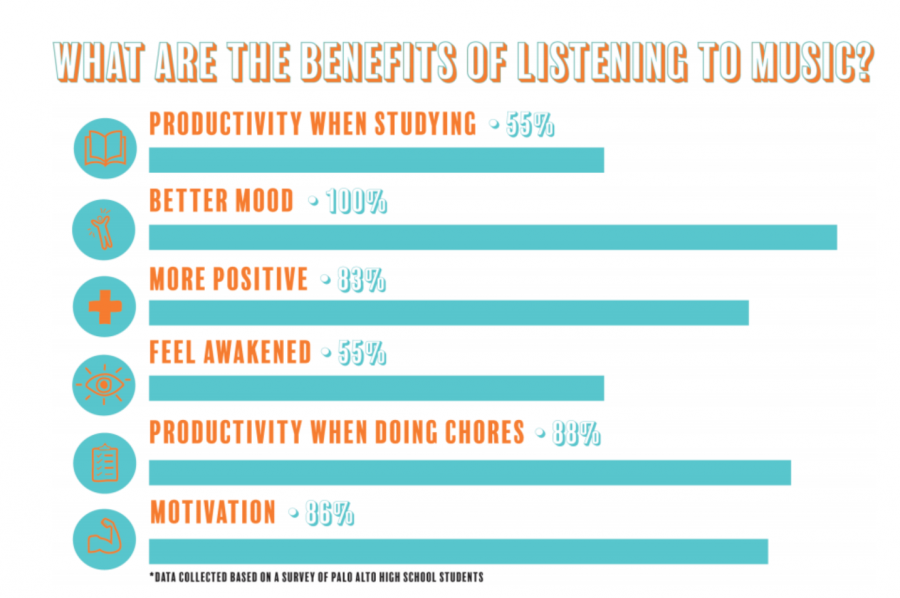 As we listen to music, our brains release dopamine, the chemical responsible for positive changes in one’s mood. This release of dopamine helps us cope with stress, giving music therapeutic properties for students.

Moreover, there is little doubt that music is a critical element of many students’ daily lives and its additional impact on day-to-day activities, such as study habits. The survey found that 85.4% of students believe that music acts as a catalyst for motivation. Additionally, 53.7% noted that music boosts productivity when studying.

In fact, the utilization of music as means for increasing productivity is nothing new. This motivation derived from listening to music can again be attributed to dopamine. Additionally, our emotions are linked to other functions, like motivation, and music has a positive effect on our emotions.

One of the most surprising findings from the survey was that 23.3% feel that their main motivator for listening to music was that they, “can’t stand the silence.” It can be difficult to comprehend these feelings if you haven’t experienced them firsthand, yet there is clear scientific reasoning behind the phenomenon.

“[Music] is a useful sensory signal,” Slaney said. “Nothing is ever really silent, so having music is a controlled noise some people find [music] as a useful background.”

With a plethora of multifaceted applications, listening to music remains to be a daily ritual for a myriad of Paly students in pursuit of increasing their productivity, bettering their mood and helping to destress. Listening to music is by no means a cure all for the woes of the world, yet the benefits music bestows upon the listener span far and wide.

Whether serving as a source of motivation for a writer sprinting to a deadline or as a universal language of sorts, music remains to be a source of happiness, productivity and a way to fill the silence of the void for eternity.

It is clear to see that music is a universal and magical language, and the fact that it can be better than speech in many ways. Music will always serve a very important purpose by helping us write through the night like Signorello-Katz’s case, or expressing our deepest unexplainable emotions.

“Fundamentally music is more about emotional response, compared to speech,” Slaney said. “And that’s an important part of being human.”