Should celebrities with massive followings like Lorde use their talents and platforms to further important causes? 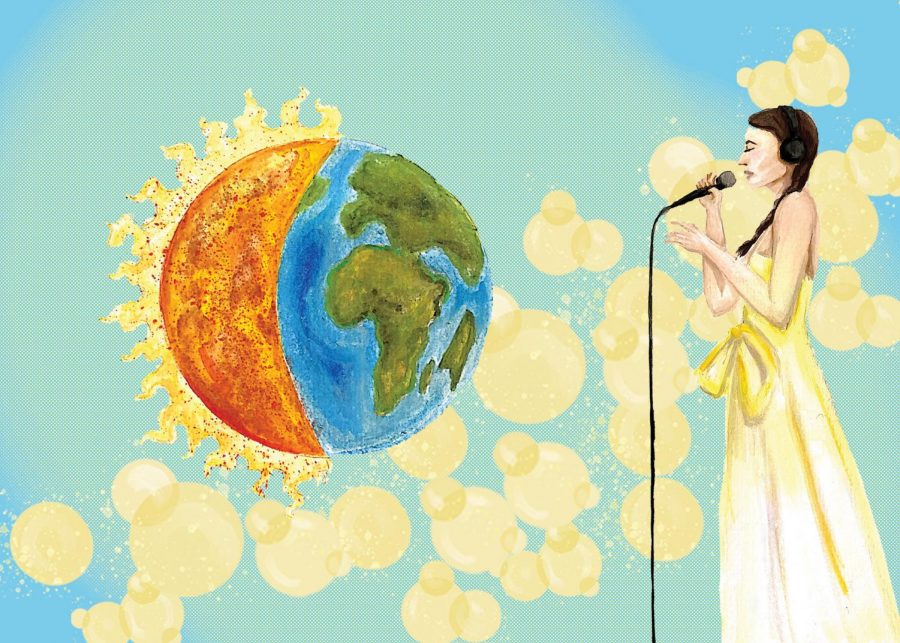 How can I love what I know I am gonna lose?” singer-songwriter Lorde sings this lyric about the environment and the climate crisis on the track ‘Fallen Fruit’ in her latest album, ‘Solar Power’.

“The album is a celebration of the natural world, an attempt at immortalizing the deep, transcendent feelings I have when I’m outdoors,” Lorde said in a June 10 newsletter to fans.

The album covers many topics, ranging from her relationship with Hollywood, to her intense love for the outdoors, to her fears about the climate crisis. Although she is not an activist, Lorde makes an attempt to incorporate activism into her art form –– and she is just one of many celebrities to do so. The pressure on celebrities to participate in activism, mostly through social media, is a relatively new concept, and the effectiveness of celebrities using their platform to create change has sparked much debate.

Such notable figures walk a fine line. Their activism can face scrutiny from fans who don’t support the causes they advocate for, however, remaining silent can cause other fans to become infuriated by their silence. High-profile figures are not presented with a correct way to use such a large platform, which can cause fans to become frustrated and even go so far as to call celebrity activism performative.

“Having a celebrity talk about a political opinion is just the same as the Coke official Instagram account saying that they support pride,” Rosenblum said. “You’re a soda. It feels honestly a little disingenuous.”

Senior Sophia Cummings has a different view than Rosenblum; she believes the benefits of exposure outweigh the possible ulterior motive.

“Honestly, whether or not it’s performative, it’s what movements really needs,” Cummings said.  “They need these big platforms to show a lot of representation and educate their followers.”

Even Lorde herself questioned how much she should get involved in activism saying, “It’s tricky to know how much to go there as a songwriter, you know?”

Lorde’s ‘activism’ in ‘Solar Power’ created a discussion as listeners wondered what its brief mentions of the climate crisis were doing to create change. While people often favor big actions; Junior Erin Brady reminds us that this album is more about Lorde’s personal love for the environment.

“Climate change is something that’s very important to her, so it will be reflected in different parts of the album,” Brady said. “I think people need to understand that there are baby steps for every cause, and so people should speak out about things that are important to them and try to do the best they can.”

Junior Lea Hadzic, the president of Paly Eco, believes the awareness these songs brought to the issue, however small, will make a positive impact.

“Even if people maybe don’t take away the key message itself, maybe they’re just more kind of motivated and interested to learn more about the specific topic,” Hadzic said.

That being said, there still are varying levels of impact that a celebrity can have with their activism, and a lot of that has to do with how they choose to do it. Rosenblum believes that often, celebrities don’t choose the correct format for their activism.

“On one hand, I think that people with a platform have a certain amount of power that they ought to use responsibly,” Rosenblum said. “But I also think that most celebrities tend to be very out of touch with what actually is helpful.”

An example of this is Lil Dicky’s single ‘Earth’ featuring an impressive lineup of celebrity appearances. The song took over three years for the 33-year-old rapper to create. But for Brady, the song was more fun than inspirational.

“I don’t remember anyone being like ‘Wow, I really loved the part where they talked about the Earth,’ everyone was like ‘Hey remember when Halsey said something funny,’” Brady said. “It didn’t make anyone want to recycle more or anything.”

A great example of direct action-based activism that led to a positive impact is the Saw movie franchise. According to a September 2017 New York Times article, the Saw franchise was able to donate more than 120,000 pints of blood through blood drives for free tickets. Rosenblum believes concrete actions like these are a more effective way for celebrities to use their platforms.

“It really comes down to actions because those are way more blunt and obvious. It can be something as small as just posting about it and educating their followers,” Rosenblum said. “But if they’re out there doing service work, they’re setting an example and people love to follow in the footsteps of celebrities.”

That being said, Lorde has taken some actions other than just lyrics in her album. This past June, Lorde released a memoir titled ‘Going South’ in which she reflected upon her transformational journey to Antarctica. It was on this trip in which she soberingly witnessed the catastrophic effects of climate change firsthand, which served as inspiration for both ‘Going South’ and ‘Solar Power’. Proceeds from sales of her book go toward a postgraduate scholarship to study climate science in Antarctica.

Despite the fact that Lorde has used this album for action-based activism, some fans are still left wondering if music is even the right medium to express these views.

“In terms of art, I listen to music because I like how it sounds,” Rosenblum said. “And it speaks to our soul. It speaks to themes that I care about, and that are important to me sort of emotionally. I don’t go to music to learn about politics or to have a political opinion.”

While Lorde’s activism relating to this album may have fallen short of what some fans wished for, Brady thinks it was still useful.

“I do think that is a beginning step – to try to do whatever you can, whatever you’re good at, use the tools you have to talk about causes that are important to you,” Brady said.

Rather than choosing a platform like social media to share her message, Lorde chose to take it in a more artistic direction, combining her own strengths with a topic that needs to be spoken about.

Cummings believes that Lorde was able to effectively combine the advocacy in her songs with her message of growth.

“She did it in a very artistic way, comparing it to her life and growth and everything,” Cummings said.

In the end, Lorde acknowledges that she and other celebrities are far from perfect.

“I’m still learning the nuances of all this,” Lorde said. “It’s on me to use my resources — resources you gave me, directly or indirectly — to donate on your behalf.”

Please click on the three vertical dots on the top right-hand side corner, then select “Two page view.”