From apple orchards to Apple iPhones 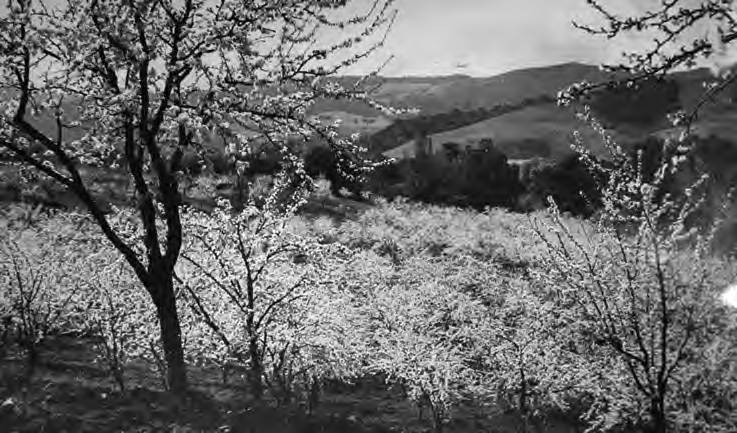 As a leading influence in technological advancement, Silicon Valley possesses high standards for those a part of its hyper-competitive, productivity-centered environment. However, before technology corporations dominated the Valley’s culture, it was one of the world’s leading agricultural paradises.

According to historian Steve Staiger from the Palo Alto Historical Association, the city was one of the leading fruit exporters in the country. “[There were] orchards full of apricots, plums and cherries,” Staiger said. “This area was a fruit basket.”

Santa Clara Valley, previously known as the “Valley of Heart’s Delight,” attracted generations of people hoping to partake in its prosperous opportunities. “People from San Francisco came down to Santa Clara Valley in the spring because of the fruit blossoms,” Staiger said. “There were so many trees where we now have houses that, if you were at a higher elevation, it looked like snow.”

Social sciences teacher and long-time Bay Area resident Debbie Whitson notices a contrast between the past idyllic landscape and the current, increasingly modern city. “[In the past], an empty lot or two would be loaded with [orchard] trees because [the land] hadn’t been developed yet,” Whitson said.

While reminiscing on her childhood in Silicon Valley during the 1960s, Whitson experienced a significant shift in its culture. Although the amount of social interactions have increased with the usage of smartphones, the quality of these interactions have diminished as people now communicate in physical isolation from one another. “In the olden days, [students] all knew each other because this was their community,” Whitson said. “Now they have a whole other community on their phone.”

With the growing prevalence of digital communication amongst young people, much of their interactions with others exist in physical isolation. Tangible connections between a person and their community have been largely replaced by a version of socialization where people are unable to observe their impact on others. This contrasts traditional in-person conversations where the back and forth subtleties in body language and tone of voice can create valued, long lasting bonds between participants.

This phenomenon generates a form of individualism that stems from young people’s growing indifference to social responsibility and their prioritization of short-term rewards and instant gratification. “We’ve lost the value of being an ordinary citizen, participating in your community, earning a living and being part of a family and a neighborhood,” Whitson said.

Staiger suggests that the shift in the collective identity of Palo Alto citizens is mainly due to a change in living circumstances, and not a change in societal values. “[People who moved here recently] are doing what people in Palo Alto have been doing for generations: trying to make a living, provide for their family and enjoy life,” Staiger said. “But today, it takes up so much more energy to have that good life.”

In the past, it was easier for people to pursue artistic and creative aspirations in Palo Alto, but the current high expenses of sustaining small artisanal businesses deems such explorations too difficult. By extension, people miss out on these opportunities to connect with other community members, an increasingly common phenomenon in cities where large technological corporations dominate. “It’s not ideal,” Staiger said. “It’s not the good life that it could be.”

Drawing a comparison between Palo Alto’s past and future illuminates an additional aspect of Silicon Valley’s evolution: its demographics. In the 1970s, cities like Palo Alto and their lack of diversity posed an obstacle to many citizens, including social sciences teacher Mary Sano and her family. “When I was growing up, we were the only Asian family on the block,” Sano said. “There was actually a petition around to not have us move in.”

Returning to Silicon Valley after pursuing a journalism career in Hawaii for 15 years, Sano noticed an increase in the region’s ethnic diversity. “Being Asian is something I really noticed when I came back,” Sano said. “There’s a greater Asian population now.”

Sano’s memories of Palo Alto consisted of engaging community activities such as flea markets and garage sales. Despite the ever-changing culture of Palo Alto, Sano’s relationships with fellow long-time residents has kept her involved in its community. “If I didn’t have those connections, I wouldn’t see that funky side of Palo Alto,” Sano said.

From apple orchards to Apple iPhones, change is a constant process in Palo Alto. As people come and go, long-time residents such as Sano, Staiger and Whitson hold a unique understanding of the town’s identity. “[Palo Alto] will continue to evolve and, in some ways, at least on the surface, be unrecognizable to people like me who grew up here,” Sano said. “I hope there’s some character that can be retained.”

For the past several decades, masses of high-achieving individuals have moved to Silicon Valley to join the center of innovation. The legacy they leave behind, however, has developed seemingly unattainable standards for future generations, often at the cost of their mental and physical well-being. “There’s this expectation that children will always do better than the generation before,” Child development teacher Hilary McDaniel said.

Working in an area where financial and academic success are often seen as measures of self worth and social status, McDaniel believes that glorified productivity is common among her students. “When you are in an area where there is a lot of wealth and success, it creates a sense of pressure and desire to succeed which, in this country, is usually tied to work,” McDaniel said.

Over her 18-year career at Paly, McDaniel has observed the rising presence of Silicon Valley’s hypercompetitive environment in her classroom. “[In the past], we certainly had students who really didn’t like getting Bs in classes, but now it feels a little bit more like the end of the world for students,” McDaniel said.

McDaniel aims to mitigate Paly’s stressful culture by employing flexible classroom policies such as take-home quizzes. However, she feels that students often disregard her effort by prioritizing other, more demanding classes. “Teachers have modified their standards because we felt like the pressure was too high, but it doesn’t make a difference,” McDaniel said. “The students in my class make a conscious choice to value a class that is less flexible over me and my message.”

McDaniel believes students may be underestimating the role they play in upholding Silicon Valley’s culture, suggesting that the pressure they experience may be partially due to their compliance with productivity-centered values. “Students around here need to take more responsibility for their personal choices, but it’s hard for them to do that when they’re living in this system,” McDaniel said. “How do you wake up from the matrix when you don’t even know you’re in the matrix?”

McDaniel feels this toxic phenomenon creates an intellectual hierarchy in the classroom in which students who do not adhere to work-centric norms are silenced because of their perceived laziness. “Ideally, you try to create connections with those students and offer them opportunities to show their classmates that their perspectives are just as valuable,” McDaniel said.

Along with a conscious effort from students, parents and administration must also assist in combating this issue. “What it will require is a complete overhaul and rethinking of what is valuable in all of our curriculums,” McDaniel said. “I hope that parents can continue to educate themselves about the pressures of Silicon Valley and support their children.”

By offering academic flexibility in her classroom and encouraging her students to reflect on their participation in this hyper-competitive culture, McDaniel hopes to create a healthier school environment. “We can be more open minded about what success looks like,” McDaniel said. “We should spend more time focusing on doing our best and being good to ourselves, [even] when our best doesn’t look like someone else’s.”

Palo Alto has come a long way from the fruit trees that once lined its streets. Now, in the city’s relentless pursuit for academic and financial success, its people may overlook the very motivations behind their actions—whether they be personal fulfillment or community benefit. McDaniel’s insight begs an important awareness and reflection for those living in the Valley of Heart’s Delight: what they chose to value. “I do wish that teachers, counselors, students and admin could have more dialogue about what a happy, healthy life looks like,” McDaniel said. “In my ideal world, students would do the research and come to a conclusion on their own and decide they want to change their world.”