Embodying the spirit of a 21st-century renaissance man, Leo Marburg’s dexterity in the realm of the performing arts is always present in his daily life. 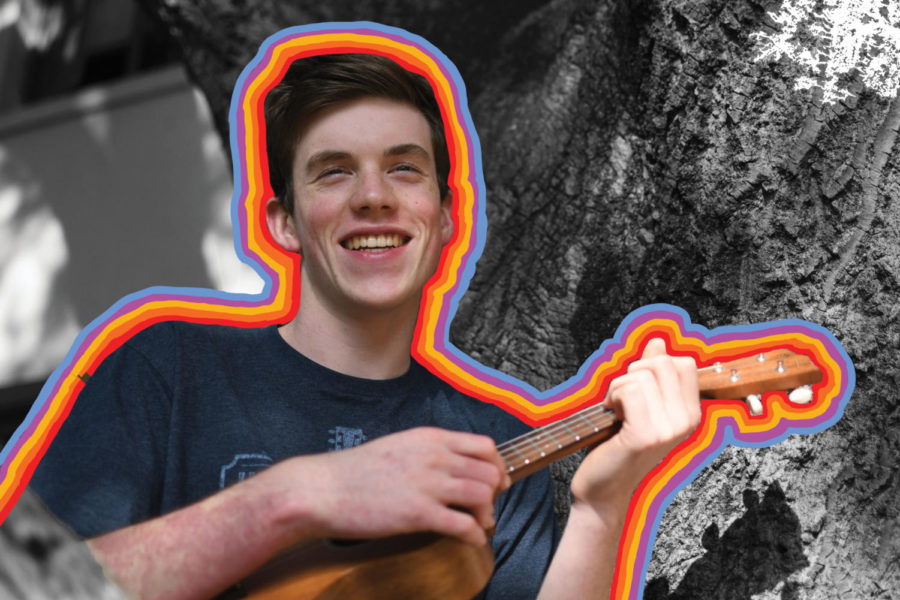 The bell rings, signaling the end of the school day. But while most students make their way to the parking lot or bike racks to head home, junior Leo Marburg is only getting started. He bolts from band practice to choir rehearsal and finally to a theatre performance, and spends the minutes in between strumming his ukulele, belting along to a song on the radio or profusely running his lines for his next role. His drive for this tireless lifestyle doesn’t originate in the iron fist of “helicopter” parents or even in the desire to draft an overly-ambitious college resume. Rather, it stems from his unadulterated passion to fill every feasible hour of the day in pursuit of what he loves— artistic expression.

His enthusiasm to perform began early in his life, since he began participating in  Christian Musical Theatre, or CMT, productions in kindergarten. After returning for multiple summers, he was ready for a change of pace, or something that was a little more serious and could take his acting further. There were auditions being held for the production of “Snow White” at the Palo Alto Children’s Theatre and 8-year-old Marburg was itching for a role. “I was very excited, but when I auditioned for my first show [Snow White], I forgot my monologue,” Marburg said. This slip up cost him the part and Marburg vowed to not return to the Children’s Theatre audition stage until he had fully recovered from the blunder and was ready to blow the casting director away.

In the meantime, something else sparked Marburg’s interest: the prospect of singing and acting with a different organization, this led him to the summer camp Hope Musical Theatre. “Getting to combine my interest in music and my interest in theatre, that’s why musicals are definitely my favorite,” he said. “I’ve done, by far, more musicals than I’ve done straight plays.” While singing in front of an audience can be intimidating for many, being on stage is one of the places where Marburg feels most comfortable.

“I just love to sing all the time,” Marburg said. “I like to sing around the house a lot [and] my brother is very annoyed by it.” He attributes this fondness to the time when he joined his first children’s choir in elementary school. The choir director noticed Marburg’s enthusiasm for singing and suggested he sign up for the after-school program, which was part of the Silicon Valley Boys’ Choir. “Choir gave me some of the biggest musical fundamentals,” Marburg said. “[Choir sight reading] really instills a greater level of understanding of the music. And I would say choir has been probably my biggest influence on my musicality.”

With newfound confidence in music and musical theatre, Marburg was ready to give traditional theatre another shot.

Fully recovered from his audition mishap with the Children’s Theatre, he joined his school’s production for “Alice in Wonderland.” To his surprise, the director of the Children’s Theatre was impressed by his performance and offered him a role in the company’s next show. From there, Marburg auditioned and worked his way up from smaller parts in the productions of “Oliver” and “The Jungle Book,” to finally landing his first lead role in the production of “The BFG.” “I was really happy that it showed if you just put in the work, eventually you will have a payoff,” Marburg said. However, he believes that the tight-knit community that develops throughout a production of a show is much more valuable than any solitary role. “Every single person in the show is super important,” Marburg said. “It doesn’t matter if you are just a member of the ensemble, you all have a hand in creating the show, and your success will have an impact on the show’s success.” 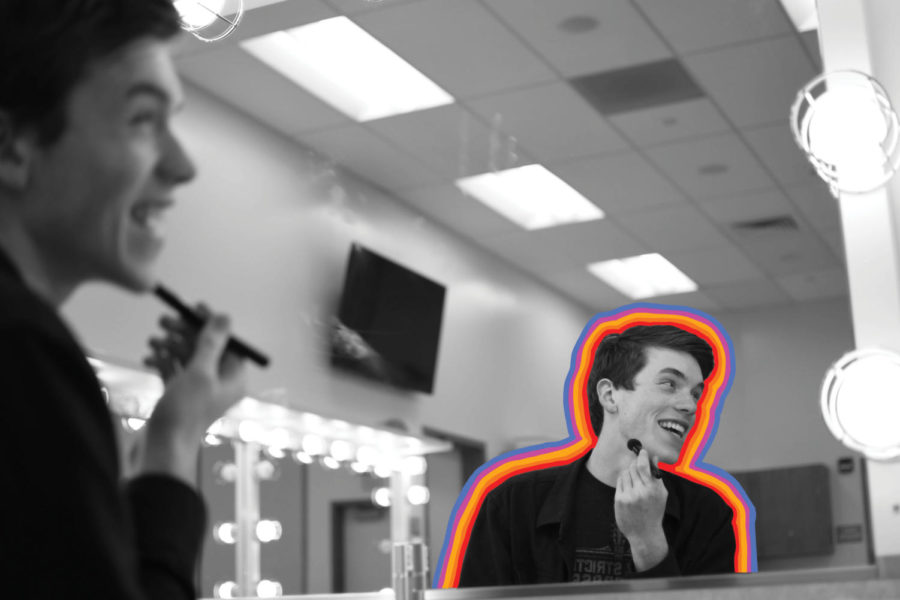 With a past as being a member of the ensemble, Marburg has gotten a broader perspective of a show in its entirety. While he feels proud of his accomplishments in theatre, he wants to give the spotlight to a different actor, believing that each show is a joint effort, in which every stage tech and actor contributes to. Regardless of Marburg’s personal opinions on casting, directors wanted to keep him center stage soon after his role in “The BFG,” granting him the part of the Beast in his middle school’s production of “Beauty and the Beast.” Not only was this production his last one during middle school, the cross-town teamwork made it one of the most memorable for him. With all three of Palo Alto’s middle school theatre programs collaborating on this production, Marburg appreciates that it gave him the chance to collaborate with numerous new faces. “I got to meet a lot of friends that I’m still friends with today,” he said.

According to Marburg, music has always held a place of value in his family, and talent even runs in his blood. His maternal grandfather sang in a choir for many years, while his paternal grandfather was one of the pioneers of the bluegrass genre. With experience in banjos, fiddles and guitars, Marburg’s grandfather helped organize one of the first bluegrass festivals in the United States and toured throughout Europe and North America. “I don’t know my grandfather too well, but I definitely feel in some way, he has an influence on me,” Marburg said.

After a visit to a local music shop on a seventh grade trip to Hawaii, an eagerness to learn more about the instrument sparked within Marburg. After purchasing his first of four ukuleles, his desire for lessons resulted in a daily pilgrimage back to the shop.

“[During the trip] I practiced [the ukulele] every day, which became like a ritual,” Marburg said. “[Now] at night I always make sure to play my ukulele before I go to bed.” 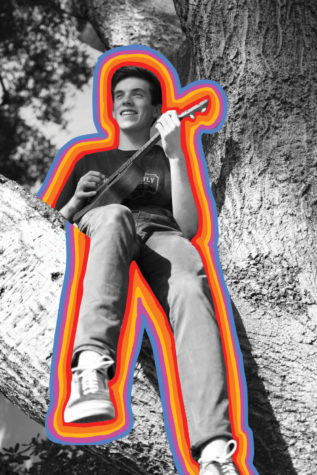 With the variety of theatre productions and musical performances he’s participated in over the years, Marburg has become more confident as a seasoned performer, prompting him to challenge himself and join an improv troupe through Paly theatre. “One of the things I love about improv is [the crowd’s laughter], it’s very validating and rewarding to have people laugh at your scenes—they don’t laugh at everything,” Marburg said. “It makes me feel really good to see that I’m making other people happy.”

In addition to the positive reactions, Marburg has found that improv has given him more training in quick thinking on stage because the main focus of improv differs from that of traditional theatre. “I think [improv] has really helped my creativity and helped me generate ideas on the spot,” Marburg said. “But it’s also just really fun to watch because it’s a whole collaborative effort.”

In terms of his future in the creative arts, Marburg is hoping to both sing in an acapella group and act in theatrical performances in college. Career-wise, his ambition is clear and direct. “My biggest dream would be to write my own musical and get to see it performed,” Marburg said.

When reflecting on his experiences in many different areas of the performing arts, he notes his constant upward climb to improve and maximize his multifaceted potential. “I’m not the best singer, I’m not the best pianist and I’m not the best trombonist at all,” Marburg said. “But I think what I like is that I didn’t [have to] choose to dedicate a lot of my time to just one thing. [I can] expand my horizons, and get all these different ways of looking at the world.”