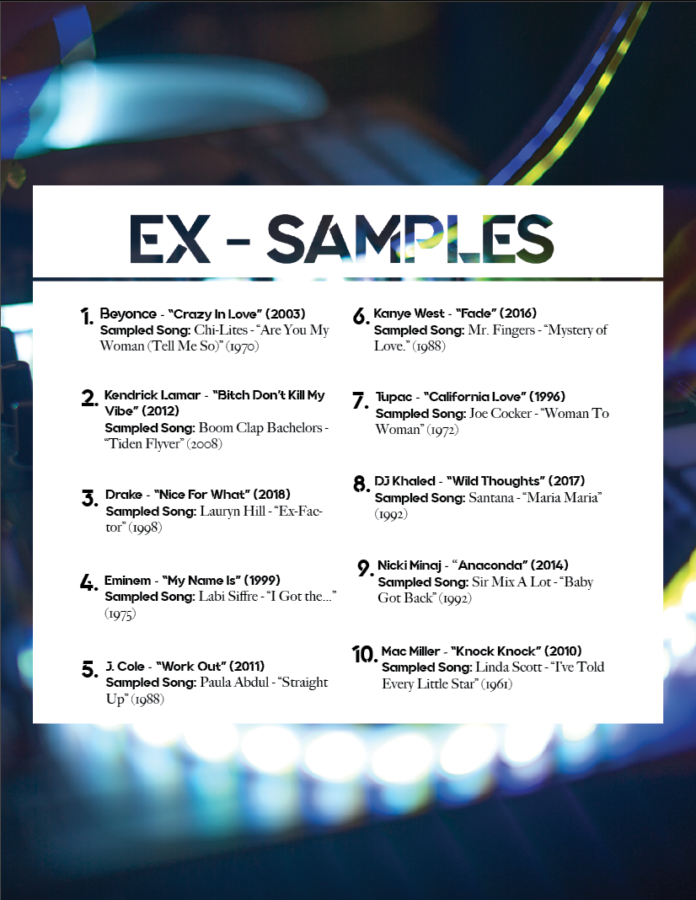 On the radio, Drake’s new song, “Don’t Matter to Me,”  begins to play. As Drake’s soulful, melodic vocals fill the car, a recognizable voice overtakes the track and the reality nearly seems impossible. Is that Michael Jackson? How could the “King of Pop,” who passed away nearly a decade ago, be singing on Drake’s new contemporary R&B track? This is the power of music sampling.

Music sampling is a tool that has played a major role in shaping the genre of Hip Hop, as it has allowed artists to take a classic piece of music from the past and rework it into their own, unique creation.

Producers use instruments called samplers to generate music from recorded instruments or vocals. The first sampler tool, the 1960s Mellotron, used magnetic tapes to convert electrical audio into magnetic energy, allowing a song to print onto a moving tape. It was only until the late ‘70s and early ‘80s, when vinyls and DJs became integral parts of pop culture, that sampling began to explode within the Hip Hop genre. DJs manipulated the sound of vinyls through techniques like changing turntable speeds and repeating the breaks in funk music in response to the crowds’ enthusiasm toward those parts of the song. The 1980s introduced samplers like the Akai S900, which allowed producers to store up to 32 samples; this era allowed machines to push the boundaries of music through creative styles of looping, slicing and splicing recordings.

Today, with the help of modern technology, producers continue to redefine music by integrating existing melodies, loops or beats into their songs rather than making completely new creations. Additionally, producers no longer go through the long process of converting audio from electrical to magnetic. Everything exists on the computer, making it efficient to simply search for loops within existing material in order to create new compositions. In addition, producers can manipulate the pitch and rhythm of each song; by altering or focusing on specific low or high frequency pitch limits and applying a wide range of audio effects, the song elements can be rearranged to create a new sound. These techniques allow producers and artists of the modern music world, especially in the Hip Hop genre, to open doors to a different time period or genre and integrate classic pieces into their new, original work.

Although developing technology has made sampling easier for artists, the increased popularity of this style has also prompted more legal constraints. An artist can legally use other music for inspiration, but the new version must have no substantial similarities to the original track. Many people know the song “Ice Ice Baby” by Vanilla Ice, but surprisingly, the background riff, with the exception of an added beat between two notes, is originally from the song “Under Pressure” by Queen and David Bowie. When “Ice Ice Baby” was released, Queen and Bowie threatened a copyright infringement lawsuit against Vanilla Ice for his lack of permission to sample a portion of their song. Though it never ended in a lawsuit, Bowie and Queen eventually received songwriting credits on the track, and “Ice Ice Baby” became a collaboration song that the two artists’ never initially asked to join.

To prevent stealing of music, artists must now go through a process called “sample clearance” in order to avoid issues of copyright infringement. However, arguing a clearance is a difficult process — many artists fail to do so either because they are unable to reach the other artist’s music publisher or they can not meet the upfront fee for the sample. In addition, the artist who has ownership over the track may demand a percentage of the song’s income in exchange for the sample.

Despite these legalities, artists have alternative methods of sampling without receiving sample clearance. With enough manipulation to the sample, artists can argue that it is an original creation, thus not requiring sample clearance. It becomes hazy with situations like the case between Vanilla Ice and Bowie and Queen, where one side claimed that the sample had no substantial similarities to the original and the other side disagreed.

Legal or not, sampling has infiltrated music in nearly every way and is a unique process that connects modern music with decades of past music, which would have been impossible in the past.